Welcome to the tenth instalment of our weekly social media news series – The Week in Socials.

We’ve hand-picked the most interesting social media news of the week and smooshed them all into one bite sized blog, giving you your Friday socials fix to enjoy with a well-deserved end of the week cuppa.

The next step in Instagram’s ongoing push into the eCommerce world, they announced this week a brand new live event: ’10 Days of Live Shopping’.

Beginning September 1st, users can tune in to a host of live streams featuring an impressive roster of celebrity appearances including Selena Gomez and Kacey Musgraves. 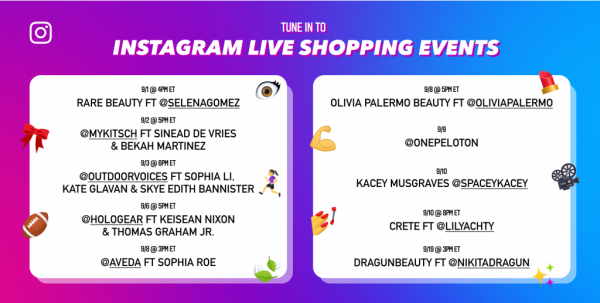 The live events are an opportunity for larger brands such as Aveda and Peloton to connect with their followers in a new way, with exclusive merch and offers up for grabs.

Instagram said: “Fashion, beauty, music, and lifestyle are coming together like never before with Instagram’s 10+ Days of Live Shopping. People can tune in starting September 1st for intimate events with Selena Gomez, Kacey Musgraves, Lil Yachty, and more surprise guests. The events give you access to fresh releases, offers, and exclusive merch only on Instagram.”

Users can access the event by clicking the ‘Live’ section on the Shop tab within the app.

It appears LinkedIn are taking their cue from Twitter, and pulling their social media stories feature from the platform.

LinkedIn announced earlier this year that they are taking steps towards further developing a “reimagined video experience” on the platform, with their recent acquisition of social media video tutorial platform, Jumprope.

Despite LinkedIn’s best efforts to promote the feature in recent months, the feature remained under-utilised. Stories will disappear from the platform from 30th September, with the promise of new video content tools arriving in the near future.

After a successful trial run, all TikTok business users will now have access to a new ‘Promote’ option within the app.

A way to set up and publish organic promotions quickly and easily, the feature, similar to Facebook’s Boost function, will allow users to turn any TikTok video into an ad from within the app.

This means users can choose to either promote a new video, or go back to take advantage of some of their best-performing TikToks. Users can choose a campaign goal, set a budget and run time for the promotion as well as the target audience and reach.

A handy new feature for businesses on TikTok to reach out to a wider audience!

In other social media ad news this week, Facebook have announced they are testing a new features titled ‘Ad Strategies’.

The new feature aims to assist users to get the most from their ad campaigns by automating and optimising various areas of the ad process.

A new, simplified ad creation process will be introduced, with a walkthrough feature to help better tailor your campaign goals.

The automated system will analyse the response to your ad over time, detecting the best ways to push your campaign further and get the most from your ad spend.

With any automated feature, chances are that sometimes Facebook will get it wrong, so it’s always best to keep a close eye on any automated element of your campaign.

But with Facebook’s growing ability to analyse and detect key trends and audience behaviours, it has the potential to drive further growth for businesses on the platform.

Why be a follower when you can be a Super Follower?

Well… it’ll cost you a monthly fee for one.

Twitter have launched a brand-new option under their new monetisation umbrella, with Super Followers now available to selected users in the US and Canada on iOS.

The introduction of Super Follows is the latest in Twitters expansion of their paid for offering, which also includes ticketed spaces and the rollout of monthly subscription service, Twitter Blue.

Super Follows pricing will range from $2.99 per month to $9.99 per month and will allow users differing levels of access to exclusive content and conversation from their favourite accounts.

Currently, the feature is only available to users who hit certain qualifications including:

The new feature is set to help creators reach new levels of engagement and interaction with their fans, building their communities and encouraging more activity on the platform.