Which Brands are Winning the World Cup?

There were plenty of concerns about corruption within FIFA, as well as the host nation. So it’s perhaps not surprising that some big-name brands have chosen not to sponsor the World Cup this year. The competition has been dubbed by many as one of the least marketed World Cups for many years.

There have still been plenty of World Cup based marketing, advertising, and PR campaigns to mark the event. Let’s take a look at some of the campaigns implemented for this year’s World Cup…

McDonalds + Under Eats helping Italians to find an alternative team

After Italy failed to qualify for the World Cup for the first time since 1958, McDonalds and Uber Eats stepped in to help Italians find a new team to support.

The campaign was called “Team for Pirlo”. This was launched with a film which sees Pirlo inadvertently insulted by an interviewer who is unaware that Italy has failed to qualify for the tournament.

The interviewer then suggests that he finds a new country to cheer on, before deciding to order a McDelivery of course!

Budweiser, the official beer sponsor of the World Cup, has teamed up with Snapchat. They created the first sound-activated Snapchat lens that will capture the noise of football fans and react in real time.

As part of the brand’s biggest ever marketing push for the tournament, Budweiser unveiled a number of global AR lenses, filters, and vertical video ads, including the first sound activated AR lens.

This will run alongside the brand’s wider Light Up The World Cup campaign. This celebrates players who light up the pitch whilst bringing fans as close to the action as possible.

The decision to hold the World Cup in Russia has prompted its fair share of controversy. Not least because of the host nation’s less than accommodating attitude to the LGBT+ community.

In response to this, bookies Paddy Power have pledged to donate £10,000 to LGBT charities for every goal scored by Russia during the 2018 World Cup. The campaign has been backed by high profile LGBT advocates, including Caitlyn Jenner, Gareth Thomas, and Danni Wyatt.

The brand’s donations will be used to help challenge LGBT prejudices both on and off the field. They will support footballers in coming out, fund educational programmes in schools and colleges, and help to ensure that grassroots teams are safe spaces for LGBT players.

As part of it’s World Cup campaign, Auto Trader is giving away a free car every time England score a goal.

To stand a chance of winning, fans must use the hashtag #AutoTraderGoals when posting to Twitter, Facebook, or Instagram, each time England score during the first 90 minutes of a game.

This was launched during England’s first match against Tunisia. The campaign will run across digital out of home, print, radio, online, social media, and branded content. The brand is also promoting it through a partnership with UNILAD.

The biggest own goals…

Of course, not everyone gets in right. Some brands get a little carried away when exercising their creativity…

Burger King in Russia has been forced to apologise after they launched a social media campaign offering free burgers for life to women who get pregnant by World Cup players during the competition. 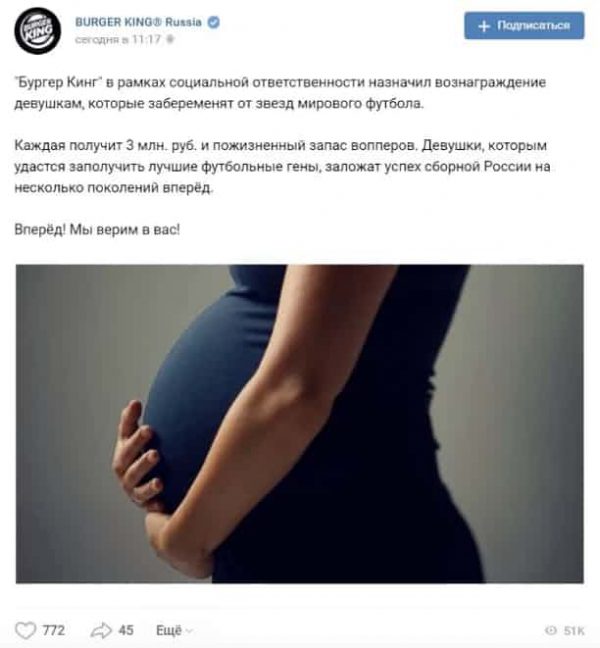 The Russian branch of the chain announced a promotion offering women 3 million Russian roubles ($47,000) and a lifetime supply of Whoppers if they get impregnated by a footballer competing in the World Cup.

Shortly after, the campaign was pulled following a backlash. But there are still plenty of screenshots documenting the poorly thought out marketing stunt.

Mastercard’s Goals for Meals is another example of a campaign that has really missed the mark.

It was launched on social media and targeting the Latin American and Caribbean regions. The campaign promised to donate 10,000 meals to children in those regions every time Lionel Messi or Neymar Jr score until 2020. Although the campaign does not specifically refer to the World Cup because Mastercard aren’t sponsors of the event, it was launched less than two weeks prior to the competition.

Although any meal donated to a child who needs it has to be a good thing, the campaign has been criticised by many as being in poor taste…